Information about Divorce in Tennessee

Often times, parties have been separated for a substantial period of time and the party seeking a divorce does not know his/her spouse’s whereabouts.  If this is the case, then a divorce can still be granted.  However, the other party must be served by publication.  A judge will determine the asset and debt allocation and parenting time.  The judge will divide marital property.  Marital property is anything acquired during the marriage except for gifts and inherited property.  Marital property includes pensions and 401Ks to the extent they were accumulated during the marriage.  The amount of child support is determined by the incomes of both parents, daycare costs, insurance costs and occasionally other factors.  In custody cases, the judge must make a decision based upon what is in the best interest of the child.  The best interest of the child will include whether the family unit is stable, work schedules of the parties, which parent has been the child’s primary caregiver, and other factors. 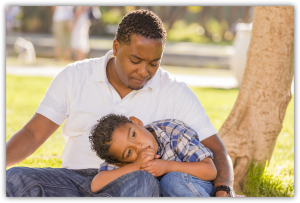 Children may sometimes  testify as to which parent he or she wishes to live with, but that does not give the child the right to choose the parent.  Only the judge makes that decision if the parents cannot enter into a parenting plan.
In contested divorces mediation is required by law.  Martha Child attends mediation with you.  Both sides meet with a trained mediator, usually in separate rooms. The mediator assesses the strengths and weaknesses of your case and tries to help you settle your case.
If a divorce has already been granted, and one parent wants to change custody, then that parent must prove there has been a material change of circumstances which affects the child.  Also, once child support has been established, there must be a 15% variance to either raise it or lower it.  Child support continues until the child becomes 18 or the class in which the child is enrolled when the child becomes 18 graduates, whichever occurs last.
In Tennessee, if the parent who is the primary residential parent wants to move more than 100 miles (either in state or out of state), that parent must give notice to the non-residential parent.  The non-residential parent may object to the move.  The judge will consider a number of factors in deciding whether to allow the move including whether the move has a reasonable purpose.